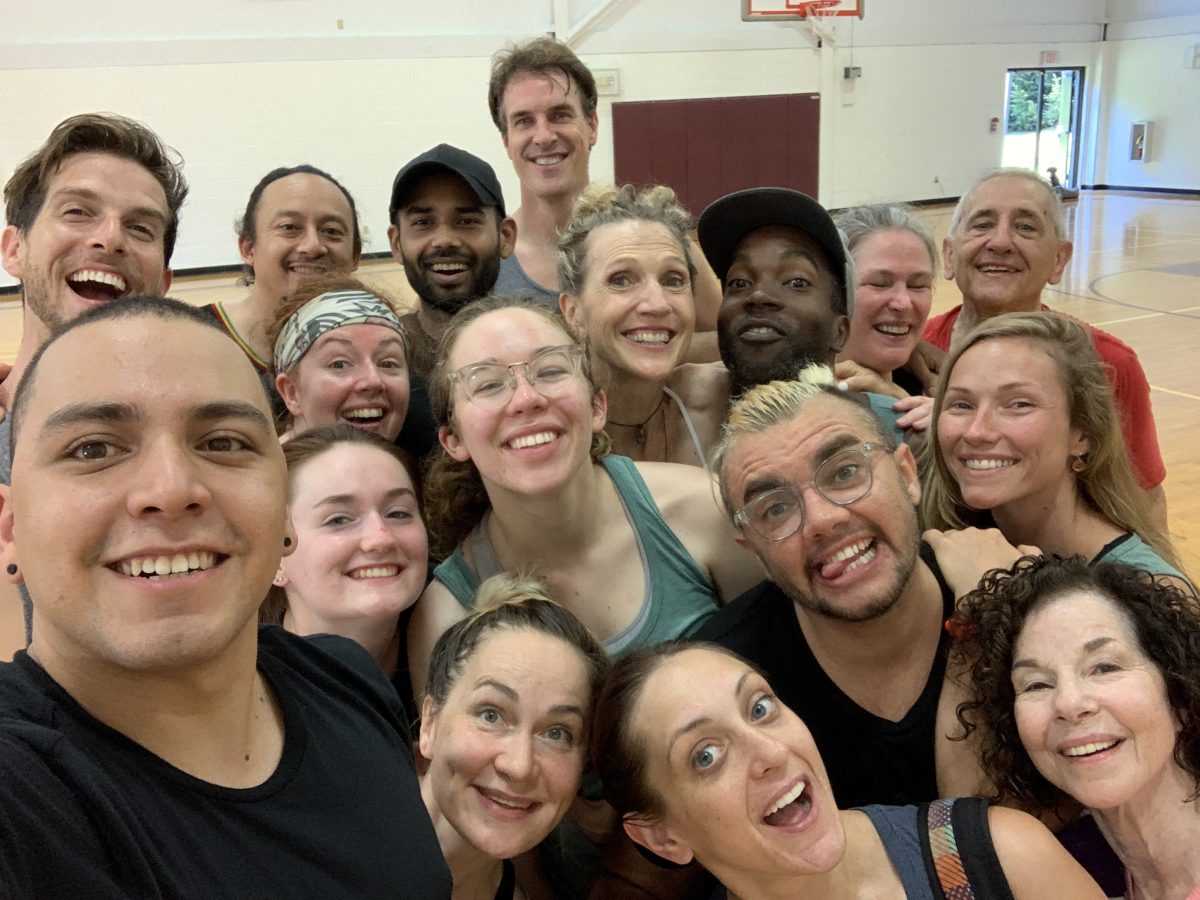 A WORKSHOP ON PHILOSOPHY AND TECHNIQUE

As a psychoanalyst there are certain questions about the nature of existence that I can only attempt to answer from the perspective of direct experience.

Awesome is being in the audience of a PILOBOLUS performance!

Exciting is the realization that one can aim for and execute the PILOBOLUS philosophy and technique learned in a workshop THE PILOBOLUS WAY!

What is THE PILOBOLUS WAY?

Since 1971 PILOBOLUS dancers have exhibited dance and athletic skills; strength; non-verbal body communication by touch, breath, and gaze; use of scientific principles of gravity, weight management, and balance; and the passion of creativity. The audience has been invited to participate emotionally, virtually, and idiosyncratically in the performances. The works, accompanied by distinctive music, usually depict events among humans and other objects the observers perceive or imagine.

The founders were Dartmouth students, not dancers, who nonetheless decided to take a dance class. They then named their group PILOBOLUS after the fungus one of their parents was studying. This resilient organism that lives on horse excrement (which might be considered a form of fertilizer) became a symbolic name for a WAY of nurturing extraordinary creativity and diversity. The PILOBOLUS WAY combines modern dance, gymnastics, and wit into visual art and the non-verbal language of movement through human collaboration, creativity, com-passion, and courage. The result is body art that is both sensational and thrilling, producing a desire for more and more…

Over decades of being in the audience I yearned to experience the PILOBOLUS WAY. The opportunity arrived in an announcement of the PILOBOLUS WORKSHOP in The JOYCE Theatre PLAYBILL. The workshop offered the prospect of moving from desire to action – a very big step and not easily taken. Reactions to my expressed desire were mixed. Those under 50 years of age urged me to “go for it!” Those over 55 years were cautious, citing all the compromises they had made to keep their bodies free of injury by reducing challenges and risks.

I wondered what was driving me. Why the “urgency” to participate? It was not only the likelihood ‘if not today,’ then probably ‘not tomorrow.’ It was also about my work! My patients and many of my colleagues believe that in the unconscious are the driving forces that define our unique being. In the philosophy and technique guiding the bodies of those who execute the PILOBOLUS WAY there might be clues about the route to the root to which I aim to engage with courageous patients interested in the unconscious and their enjoyment of life. Each “one” bravely talks and opens and stumbles and slips and uncovers and falls into “nonsense” or lack of meaning, disengaged from universal meanings of words. They become immersed in their perceptions, visual memories, body sensations, dreams, and slips of the tongue in order to uncover what is real in them. There was something luring me to experience my own body in workshop with others in the communion of feelings, sensations, and movement. Each participant would be different, yet human, and still possess some personal mystery. The PILOBOLUS WAY could help us learn and discover more of ourselves and about others.

Each of us in infancy is first touched by our caregiver, usually mOther, but not always a mother. The first Other is followed by other caring surrogates — father, siblings, extended family, friends, teachers, neighbors, etc. Each one learns the (m)Other’s tongue. While the words multiply as we mature, the results are actually increasing degrees of separation, alienation, prevarication, and disguises in the multiplicity of meanings of most of the Others’ words. If we pay close attention, we discover there are difficulties of communicating with words, where the meanings of others may approximate but are often not the same as our own. We eventually discover each word can have multiple and even equivocal meanings. We are fortunate to have shared speech. However, this shared speech often results in confusion or misunderstandings. Somewhere in the PILOBOLUS body experience there was the lure of feeling earlier life moments that could circumvent the limitations of verbal speech and more accurately bring participants closer to mutual and visceral experience and understanding. 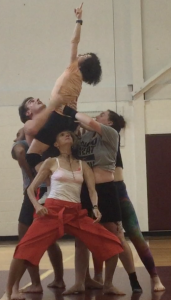 Here is some of what I learned during the 5 day workshop. It was about dance and movement and another version of living with others. The PILOBOLUS method usually involves the immediate presence of one or more “others.” It is not usually solo work. It is like life — only in dance and physical activity. A participant is in relationship — social relationship with other humans. There is always an exchange of energy that makes for non-verbal communication and often effectively achieves transmission of intent and alerts the participants to work it out. Problems arise requiring efforts at solution, as in life. The problems could involve discussion, but ultimately they demand “action.” 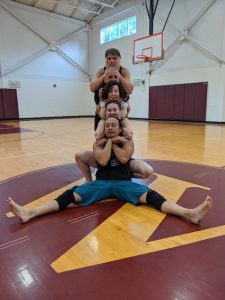 The potential and multiple movements of the PILOBOLUS WAY are diverse. Among the movements which represent a form of interactive body language include pushing forward; pushing apart; pulling away; walking or running in various directions (forward, backward, sideways, diagonally); walking requiring avoidance of collision (around or through or halted); walking at various levels from the ground; strategic mounting of another or being mounted for human constructions; extension of energy mutually in relatively equal amounts so as not to injure but engage in connection and contact; leading or being led blindly; being lifted by another’s body’s movement—rising, descending; lowering through one’s own initiative and being enabled to lower further by the paradox of the support from one or more others; being received and caught; assuming leadership, relinquishing leadership, and following; and more… 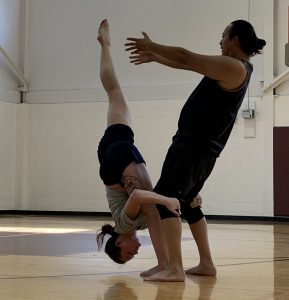 Often the movements of engagement require that one have access to personal trust — first of self and then trust of the other. Being led with eyes closed the first time was challenging. Once closed and in movement, my eyes involuntarily opened. Insistent that I try, I gave up my gaze to trust the other. Falling into the arms of others required that I resort to the meditative breath, so I could execute the task, assuage my anxiety, and end up in a calm state. Finally, I allowed myself to be caught and supported by my comrades.

This precious moment was available to every participant – a profound moment of trust. It was an opportunity to re-experience in adulthood a feeling of extreme dependency. Each one was as if at birth – without the words to describe this original condition of life. 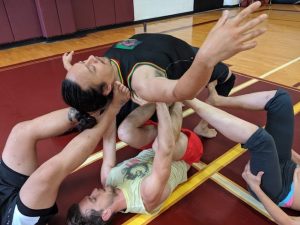 And then there was the choreography in conjunction with one or more others, encouraging one’s expression of creativity. Here I was feeling initially incapable and hoping to be ignored. I reluctantly offered my ideas and was comfortable, when I saw they fell short of acceptance. Then I experienced a need to offer other ideas, possibly more acceptable ones. These new ideas contributed to the promotion of our joint projects. Something in the collaboration ignited the creative spirit from within that drew me and each other person into participation as contributors. No one seemed willing to submit to “dropping out” or being dominated by another’s point of view.

The other participants are remarkable people. Each is different from the other but similar in the passion to learn more of the PILOBOLUS WAY and also in our ability to perspire profusely. The workshop took place in a gym with cross ventilation but no air conditioning. It was the time of a heat wave. Once the perspiration began dripping and we began to slide together and share it, the heat and perspiration were a means of gluing us more deeply into togetherness and cooperation. 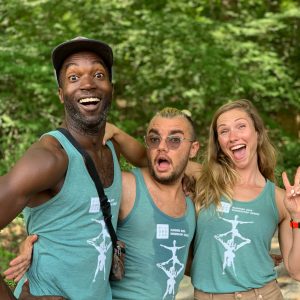 Initially our teacher-leaders asked for our names and for a “movement” or gesture to identify ourselves. They asked us to say how we were feeling at the start, the conclusion of each day, and frequently in-between. Their questions encouraged self reflection, if we were not already in the habit of doing so. They encouraged us to share ourselves and learn about the activities, foods, and other personal experiences each other enjoyed. The teacher-leaders welcomed our reports of our physical and/or emotional states to the degree we were inclined to share. They spoke of themselves, as well. They encouraged us to become confidantes and comrades. Trusting and caring evolved. 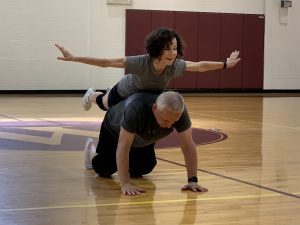 Sometimes participants spoke from a place deep down in the gut or from the depth of their hearts, often choked up and sometimes with tears. We spoke not only about ourselves but also about the other. We gave feedback about how we felt about and thought of our own work. We were encouraged to speak of the work of the others. In reflection it was the most graceful form of constructive criticism I have experienced. The feedback seemed sincere, was sensitively delivered, and offered with respect and caring. Collaborative input could bring initial gambits of work to subsequent levels of excellence, achieving actualized expressions of intentions or new and admirable renditions of the initial work.

A starting point of the initial work might have been simply the instruction to create something using two words like “wait” and “weight” OR create something by touching a predetermined body part (e.g., the “wrist”) to another’s body part. The growth process seemed seamless – without a glitch, a blip, or an impossible hurdle. It was a labor of love among participants and their PILOBOLUS teachers. Works started and created in the gym reached new levels of excellence in the nurturing process of observation, discussion, re-working, more feedback, and practice. These works were eventually performed on a stage at a festival at the conclusion of the 5 day workshop. They were joyfully performed by the participants and received with appreciation by the audience. 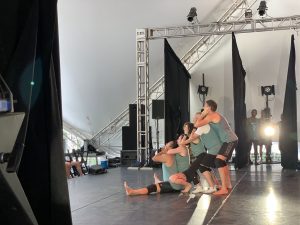 It was interesting how we came to speak of ourselves to others. We managed to say important words in multiple ways: excitement, gratitude, awe, exhaustion, pain, anxiety, etc. We were often in these feelings. The different ways these messages could be sent and received were impressive. It should be noted the participants were from many different locations and cultural backgrounds. Some but not many were from NY and Connecticut. Others were from Arizona, Massachusetts, Colorado, Oregon, Alaska, Florida, California, Wisconsin as well as arrivals to the US from Siberia, Russia and Paris, France and even a participant from Colombia, South America. 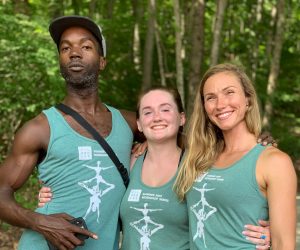 Our PILOBOLUS teachers were very skilled “group” leaders. They facilitated physical-motor processes and verbal processes with mastery. Their ability was similar to professionals whom I know well who have doctorates in mental health practice. When I discovered the first morning that one of the teachers was reading Yuval Noah Harari’s book SAPIENS: A BRIEF HISTORY OF HUMANKIND, I felt we were in store for a memorable “human” experience. 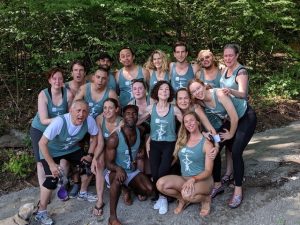 The Workshop was a significantly “humane” experience. Direct experience of the PILOBOLUS WAY illuminated the perceptual, motor, emotional, and visceral experiences of the body underlying and influencing our verbal discourse and awareness. The gems of the PILOBOLUS WAY have provided valuable “know how” to discover and enhance the unfamiliar, mysterious, and unconscious in each of us.